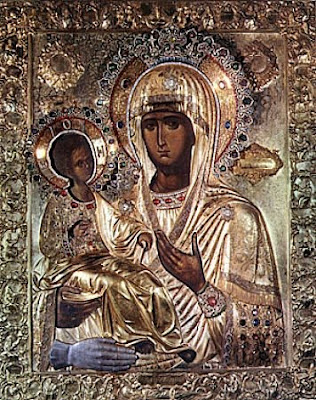 It is the most revered one in Chilandar, and the most significant icon for the Serbian people. According to legend, it belongs to the icons painted by the Apostle and Evangelist St. Luke, the first Christian painter. There is a painting of St. Nicholas on the reverse side of the icon.
The icon earned its name in the 8th century during the time of the iconoclast fury. One of the greatest opponents to it was Saint John Damascene (+c.780, Comm.4 December), at that time still living the secular life. Monk John Damascene was zealous in his veneration of holy icons. Because of his writing against the iconoclasts, he was slandered by the emperor and iconoclast Leo III the Isaurian (717-740), who informed the Damascus caliph that the Monk John was committing treasonous acts against him. The caliph gave orders to cut off the hand of the monk and take it to the marketplace. Towards evening Saint John, having asked the caliph for the cut-off hand, put it to its joint and fell to the ground before the icon of the Mother of God. The monk begged Our Lady to heal the hand, which had written in defense of Orthodoxy. After long prayer he fell asleep and saw in a dream, that the All-Pure Mother of God had turned to him promising him quick healing. Before this the Mother of God bid him toil without fail with this hand. Having awakened from sleep, the Monk John saw that his hand was unharmed. In thankfulness for this healing the Monk John placed on the icon an hand fashioned of silver, from which the icon received its name "Of Three Hands".
According to tradition, the Monk John wrote a song of thanksgiving to the Mother of God – "All of creation rejoiceth in Thee, O Full of Grace", which appears in place of the Mother of God hymn "Mete it is in truth" in the Liturgy of Saint Basil the Great.

After having been miraculously healed, John Damascene entered a monastic order. He spent his monastic life in the Lavra of St. Sava of Jerusalem. He brought along the miracle-working icon of his Benefactor, the Virgin of the Three Hands. There were two more relics in the Lavra: the miracle-working icon of the Virgin Galaktotrophousa (She Who Suckles) and pateritsa, the episcopal staff of St. Sava of Jerusalem. The legend has it that on his deathbed this saint foretold that a royal son of the same name, Sava, would come to the monastery, and that at the moment of his paying tribute to the tomb the tied up staff will fall to the ground. He bequeathed both monastery relics to the future monk with the name Sava, as his blessing. John Damascene added his own bequest, that the royal son should be presented with the icon of the Virgin Troyeruchitsa.
Five centuries later the prophecy of St. Sava of Jerusalem came true. The Serbian monk Sava arrived to Lavra. While he was paying tribute to the saint’s tomb, the episcopal staff fell down. The miracle repeated the next day, all doubts of the monks gone. They knew for sure then that the Serb Sava was the one they had been waited for.

The miracle-working icon of the Virgin Troyeruchitsa was cherished on the courts of all the rulers of the Nemanyich dynasty. In the late 14th century it was transferred from the court of the Tzar Dushan the Mighty to the monastery Studenica. In the early 15th century, Studenica became the target of the Turkish invaders. Advised that the Turks were approaching the monastery, the monks quickly took out all of the valuable objects. They tied the icon of the Virgin Troyeruchitsa to the pack-saddle of a donkey, and let it go wherever the Virgin led him. The donkey passed through Serbia and Macedonia, to arrive to Mount Athos. It stopped in the vicinity of Chilandar. Seeing the donkey and understanding what was going on, the monks from the monastery hurried to meet it. When they took the icon off the donkey, the animal dropped dead.

At the end of the 15th century, Chilandar had a problem regarding election of the new abbot. Numerous monks of Serbian, Russian, Greek and Bulgarian origin could not come to a decision. Then, during an evening service, the voice of the Holy Virgin was clearly heard coming from the icon, saying that she was their abbess. The next morning, during the morning service, the icon was found on the abbatial throne.
Thinking that it was a trick, the monks returned it to the altar. But the same thing repeated the next day. The monks understood then that they should not continue with the election or move the icon from the abbatial throne. Thus the Virgin Troyeruchitsa became the abbess and patron of Chilandar.

In the year 1905, at the request of the Headquarters of the Russian Tzar Army, then at war with Japan, a copy of the icon Troyeruchitsa was made and sent to the battlefield, to help the Orthodox Russian army. The Russians indeed started to win the battles. After the peace was signed between the two empires, the copy of the icon was returned to Chilandar.

In the 90s of the 20th century, the magnificent copy of the Virgin Troyeruchitsa arrived to Serbia. It is displayed in the Temple of St. Sava, on the Vrachar plateau, on a special proskynetarion in the nave, next to the abbatial throne. There is an ever-burning big sanctuary lamp in front of the icon, the oil of which has already healed many a sick person. The icon of the Virgin Troyeruchitsa is the first Athonite relic which has been taken out of the Holy Mountain, against the canonical rules. In 1993 it was displayed in the church of St. Demetrios in Salonika, and was visited by more than a million of believers. It performed another of its many miracles there, giving sight to a 33-year-old man who had been blind ever since his birth.
στις 00:44