ST. JOHN OF KRONSTADT AND THE EDUCATION OF CHILDREN 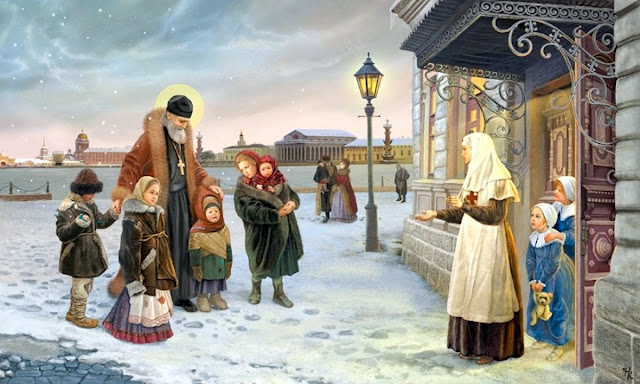 St. John of Kronstadt brings homeless children to the shelter.
A child’s soul is divine beauty
St. John of Kronstadt considered love for children to be the foundation of a teacher’s work—a foundation that is very often denied by modern-day so-called technicians of secular educational sciences and activities. He said to the students of the gymnasium where he taught, “You are my children, for I gave birth to you and continue to give birth in you to the good tidings of Jesus Christ. My spiritual blood—my instructions—flow in your veins. You are my children, because I have you always in my heart and I pray for you. You are my children, because you are my spiritual offspring. You are my children, because truly, as a priest I am a father, and you call me “batiushka” (“little father”, an affectionate term for a priest).
In Fr. John lived a kind of unearthly, angelic love for children, which inspired him and motivated the entire educational process. It was a special gift of God’s grace, which burned in him so strongly that in later years, when he was no longer teaching, he often healed sick children with the power of love and prayer, continually blessing and instructing them in the faith. How often did he weep over sick children, especially if they were spiritually sick! Once he stroked the head of an emotionally ill boy, and another time he kissed a seriously ill girl in the hospital, kneeling before her bed. “My dear, are you in pain? My little sufferer!” Fr. John lamented.”
Father John’s strictness
Nevertheless, Fr. John could be abrupt. One day a sixteen-year-old boy who was extremely lazy and morally spoiled, expressed his disbelief before the entire class in the divinity of the Holy Spirit. Fr. John called him godless and a miscreant, but he did answer his question. Later he summoned him for a separate conversation, after which the boy felt renewed and strengthened in spirit.
Some recall how a noblewoman complained to Fr. John about the degradation of religious and moral education of her children. “Their teachers,” she said, “taught them everything they need to pass the exams and be clever.” “You should say that they pounded them and not taught them,” Fr. John corrected her. “When being pounded with spiritual knowledge, they have the same feeling as when they are learning arithmetic and so on. But how about you? Do you take care of their souls? Have you directed them so that besides human approval they would strive for God’s approval?” “I suggest it to them according to my strength,” the lady answered him. “After all, one can’t find the door to one’s own child’s heart.” “You didn’t find the door to the heart, so you’ll get beasts instead of humans,” Fr. John replied. “You have forgotten that the Lord has shown mankind an example in the bird species. A bird first gives birth to an egg, and until this egg has been kept for the proper time in maternal warmth, it remains an inanimate object. It is the same with people. The born child is that egg—with the beginnings of earthly life, but inanimate with respect to his blossoming in Christ. The child who has not been warmed by his parents and family to the root of his soul, to the root of all his feelings, will remain dead in spirit for God and good works. And it is precisely from these children not warmed by love and spiritual care that those generations come into the world, from which the prince of this world will recruit his armies against God and His holy Church.”


The loftiness of trust and responsibility in the education of God’s children
Fr. John warned that God and parents have entrusted their children to the teacher, and this requires responsibility and a careful relationship to them. He often noted that everything beautiful, individual, and unique has already been placed in the child’s heart as in a seed. God also provides everything needed for their growth and development; but for our modest, but extraordinarily difficult and painstaking work—education—we must have love, and care for the children. But as great is the responsibility, so great also is the reward for conscientious work entrusted by God; for children are His inheritance. In them is not only our future, but also our present, and especially the eternal future. “Be strongly vigilant,” Fr. John reminds teachers, “that you never disdain in your heart any of these little ones (cf. Matt. 18:10) whom you might dislike for some reason. You are disdaining God’s angel, which was assigned to watch over him. You are disdaining God’s child; you are disdaining the Lord Himself, the Father of all children, first of all.” Thus, whoever violates the least of these commandments out of negligence, considering it insignificant, and teaches others to do the same, will be called the least in the Kingdom of Heaven (according to St. John Chrysostom’s exegesis, “the violator of the law will be the least, that is, the last, cast out and unworthy of the Kingdom of Heaven”), and whoever keeps and teaches [the commandments] will be called great in the Kingdom of Heaven (cf. Matt. 5:19).
St. John’s commandment to teachers
What does Fr. John command the instructors of children for the discernment of and caution against sin? What does he command the children themselves so that they would know of the danger and consequences of sin? He said, “Warn the children about sin and its consequences!” And he instructed, “Do not leave children without attention with regard to uprooting from their hearts the chaff of sin, wicked, evil, and blasphemous thoughts, sinful passions, inclinations, and habits, from which our lives are also made. The enemy of salvation and the sinful flesh does not spare the children either, and the seeds of all the sins are also in them. Present a picture to the children of the whole danger and sorrowful consequences of their sins, so that they out of ignorance and unreasonableness would not be formed by their elders on the path of life in sinful passions and habits, which multiply and grow with age.”
Christian upbringing is the first line of defense in the struggle for the salvation of a child’s soul. Fr. John, who himself had difficulty learning as a child, was according to the recollections of his contemporaries a remarkable pedagogue. He never resorted to methods of teaching that were often found in schools: neither to excess strictness, nor to the moral humiliation of slow learners. Well known was his warm, soulful relationship to the students as well as to the work of teaching itself. He had no “slow learners”. Everyone at his lessons without exception greedily soaked in his every word. They couldn’t wait for his lessons to start. His lessons were more of a pleasure for the students than a heavy burden and obligation. It was living conversation, engaging speech, and interesting, attention-grabbing stories.
There were often cases when Fr. John would defend a lazy student who had been “condemned” to expulsion, and he would take the child’s correction upon himself. A few years would pass, and the child who seemed to be a hopeless case would be raised up as a worthy individual.
Christians, first of all, should take care that the children grow to be unwavering in the Christian faith, true children of God, living members of the Church, so that Christ would be formed in their hearts (cf. Gal. 4:19), so that more than anything in earthly life they would love and prefer God, then their neighbor as themselves (Mt. 22:37-40). So that the goal of their lives, in the words of St. Seraphim of Sarov, would be the “acquisition of the Holy Spirit” unto the salvation of their souls.
Archpriest Alexander Zelenenko
Translation from Pravoslavie.ru
By Nun Cornelia (Rees)