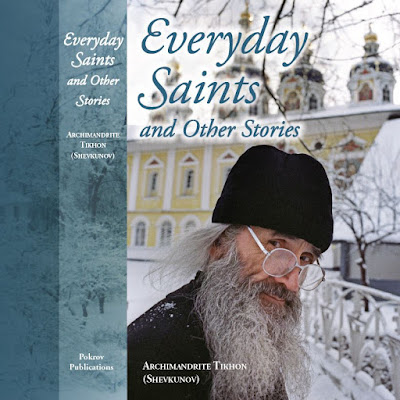 A review and excerpts from an amazing book that eloquently speaks about the soul of Russia that is so misunderstood in the world today.
I discovered this book while surfacing the internet at the beginning of December and I ordered it from Amazon.   I finished reading it last night and I was simply blown away by the profound spirituality that it offers to a suffering world.  The book was first published in Russian in 2011.  It was translated into English in 2012.   More than a million copies and several million electronic versions of this book were published in less than a year after its release.   Every Day Saints is the English translation of the work that has soared to the top of the bestseller lists in Russia since its publication in late 2011.  Winner of several national awards including “Book of the Year,” its readership spans philosophical boundaries.  Surpassing all competition many times over, it was voted the most popular book in Russia for 2012.
Open the book and you will discover a wondrous, enigmatic, remarkably beautiful yet absolutely real world. Peer into the mysterious Russian soul, where happiness reigns no matter what life may bring.  Page upon page of thanks, praise, and testimonies to the life-changing effect of these bright, good hearted, and poignant tales have flooded the Russian media.
As a retired Greek Orthodox priest in America, I would recommend especially that every priest or young man who plans to become a priest in the Orthodox Christian Church should read this book.   Every lay person in the Orthodox Church in America should read this book to grasp the triumphant spirituality that pervades our Holy Orthodox Church.  It reveals to us how the Russian Orthodox Church survived seventy years of brutal atheistic communist brutality.   This is especially important for Orthodox Christians in America who, facing rampant materialistic liberalism, need a firm spiritual foundation to defend themselves from this scourge of contemporary life.  This scourge is just as destructive as communist atheism.
Compiled by:
+Fr. Costas J. Simones, Waterford, CT, USA, December 30

EXCERPTS FROM THE BOOK
The translator of this book writes the following in the introduction of the book.  “It may surprise some of us who grew up during the Cold War, but Russia, feared for so many years as the land of godless Communists, is in fact one of the most intensely spiritual and devout nations in the world.  The profound faith of its people, Orthodox Christianity, rooted in a mystical understanding of  life as a covenant and of worship as a sacrament, has always been the secret underpinning of the mysterious Russian soul, whose elusive immanence makes Russian literature, art, and music so special.  In the twentieth century, under brutal totalitarianism of the Soviet system, Russia endured some of the very darkest days in human history.  Yet where there is darkness, as this book shows, light shines forth ever brighter to meet it.  Ultimately, though it may take a while, love and light and compassion conquer hatred and darkness and indifference.


Whether we are religious or skeptical, whether you care about Russia or not, you can still let this book transport you to a world and a way of looking at things of which most of us have no inkling.  A world of ritual and sacred ceremonies; of ringing Church bells and angelic choirs; of poverty  and husbandry; of devotion to the land and also to spiritual objects of unearthly yet practical beauty, such as icons; a world of onion domes and candles; of incense, of prayers, of souls and spirits.
Welcome to a world where everything means something and everything has a reason.  A world of tradition and honor, yet of humor; of rigor, yet of profound compassion; of hard work performed with devout reverence, yet of ease and profound inner contentment.  A world of modesty that is also majestic.  It is a world of monasteries and cathedrals and convents, of bishops, of monks and nuns, of prayer, and of contemplation.  This is a world where the Divine is present in everyday life; where every action, every thought, and every feeling has consequences; where uncanny coincidences are commonplace.  A place where we are not alone, bereft of plan or purpose, in an empty and meaningless universe.”
THE MEANING OF DEATH
Visiting the dying Sergei Fydorovich

I said that I have come in order to remind him of the precious teaching that is kept and passed on by the Church from generation to generation.  The Christian Church does not only believe, but absolutely knows that physical death is not by any means the end of our existence, but is instead the beginning of a new life for which the person is predestined.
This new life is endless and is open to those who have filled themselves with God our Lord, Jesus Christ.  I told Bondarchuk about the beautiful and remarkable world after death that is endlessly good and full of light to which our Savior will lead anyone who trusts himself unto Him with all of his heart.  And I told him that one needs to prepare for this great event of dying and transition into a new life.
As for the horrible visions that had so cruelly been torturing the patient, I tried here to set forth the basic teachings and experience of the Church about the reality of the influence upon us of the evil spirits.  Modern man has difficulty accepting this theme.  However, Sergei Fyodorovich had clearly felt the reality of the presence in our world of these pitiless spiritual entities for himself, and so he listened to me with great attention.  At the threshold of death, once someone approaches the boundaries between this world and the next world, the previously impermeable barrier between the two worlds can dissolve.  Unexpectedly one can begin to see a new reality.  One of the greatest shocks is often the fact that this revealed new reality can be aggressive and truly awful.
People who are separated from the Church do not understand that because of their sins and passions for which they have not yet repented, they can be prey to these evil spiritual entities, which the Orthodox Church calls demons.  These demons were in fact torturing the dying man, partly by taking on the visages of persons who he had once known.  The goal of these demons is to frighten us, to make us feel terror, powerlessness, and utter despair.  Their goal is to make sure that the soul passes into the other world in an agonized state of hopelessness, despair, and the absence of belief in God or any hope of salvation.  When I finished, Sergei Fyodorovich, the dying man, said that he wished to confess his sins with a full heart and receive the Holy Mysteries of Christ.
I went back to Sergei Fyodorovich and told him that now we would get ready for confession and Holy Communion.  “But I have no idea how that is done.”  “I’ll help you. But just one thing: do you believe in the Lord God and in our Savior Jesus Christ?”  “Yes! Yes! I do believe in Him!”  “But I, I’ve always been asking Tolstoy for help.”(being an atheist as a communist during his adult life and Tolstoy became like a god to him)  “Tolstoy was a wonderful and great writer! But he will never be able to defend you from those horrible visions that you have been having.  Only the Lord can do that.”
It was now time to prepare for the Sacraments of confession and Holy Communion.  However, as before, the portrait of his beloved genius was on the wall opposite him like an icon.  There was no way that I could place the Holy Gifts of Holy Communion on the commode beneath the portrait of Tolstoy.  It was unthinkable!  In life, Tolstoy had not only refused to believe in the Sacraments of the Church, but he had openly and cruelly mocked them.  Indeed, he had with particular refinements satirized even the very Sacrament of Holy Communion.
Bondarchuk confessed before God all the sins of his life profoundly, courageously, and sincerely.  After this the whole family walked into the room, and Sergei Fyodorovich, for the first time since his distant childhood, partook of Holy Communion.   Everyone was amazed with what feeling he did this.  Even the expression of pain and suffering that had never gone from his face had suddenly vanished.


Before I left the house I had another moment alone with Sergei Fyodorovich.  I wrote the simple Jesus Prayer on a little piece of paper and left it in front of him: “Lord Jesus Christ, Son of God, have mercy on me, a sinner.” Sergei Fyodorovich did not know any prayers.  And of course in his condition he could not learn anything more complicated.  I then removed my monastic prayer rope from my own arm and taught Sergei Fyodorovich how to use it.   He was no loner being tormented by dreadful visions.  He had calmed down and was somehow visibly resigned to the suffering of this world.  His daughter told me that he often saw her father staring for hours at the icon of Jesus, (which had replaced the large portrait of Tolstoy) or, having closed his eyes, whispering a prayer at each knot of his prayer rope.  Sometimes he would press the little cross at the end of the prayer rope to his lips. (After the death of Sergei, a number of his atheistic communist friends were baptized members of the Orthodox Church.)
..:apanta ortodoxias
στις 22:43