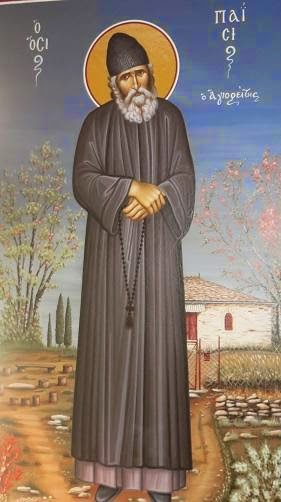 A man came to my cottage once, telling me how depressed he was, because of the disputes he had with his wife. However, I didn’t find any serious problem. He frowned because of something, and his wife frowned about something else, so they couldn’t join together. In this case a little “furnishing” was necessary. As an example, we can take unfurnished planks. One has a knot in one place, the other one has a knot on another place, and if you try to put them together, an empty space will appear between. But, if you equalize and furnish one of the planks on one side, and the same is done with the other plank with the same furnishing tool, they quickly fit with each other, and there is no empty space between. (Elder Paisios considered that the married couple should have one common spiritual father, who will help them in the reconciliation of their disputes.)
Some men say: “I am not compatible to my wife, we are totally different characters! Why does God make such strange things? Couldn’t God harmonize the married partners, so their characters be the same or similar, and so that they could live in spiritual togetherness?”
I tell them: “Don’t you understand that God’s harmony lies in the different characters? Different characters harmonize each other. God save you from being the same characters! Imagine that both of you have the same character, what would happen if both of you grew angry: you would destroy your house. Or, if both of you would be gentle and inactive, both would start sleeping on each others feet! If both of you would be stingy, you would be similar and you would agree among each other, but both of you would go to hell. If both of you would be squanderers, would you be able to save your house? No. You would demolish your house, and your children would end up on the street.
If one has a bad temper, and marries one with a bad temper, they will be the same or similar, won’t they? But, they would kill each other in only one day!
God created so that the gentle and nice partner is to marry someone different, give him help, because it might be he always has had good will, but there was no one to help him, since he was born.”
Even little differences in our characters may help the partners to form a harmonic family, because they supplement each other. You need an accelerator pedal to move your car forward, but still you need the brake pedal to stop when needed. If there would be a car with only a brake pedal, it would stay in one place for good. If there would be a gear-box but no brakes, the car wouldn’t stop.
Do you know what I once told a couple? “You do not fit with each other, because you fit too much with each other!” Both were oversensitive. Something would happen in the house. He was a bit confused saying: “Oh, what will happen to poor us?” Then she would say the same: “Oh, what will happen to poor us?” They were helping each other to fall more quickly in desperation. Couldn’t she, in opposition, calm down her husband saying: “Wait, it’s not so terrible what happened to us.” I have noticed this in many marriages.
And, in the education of their children, when different characters, the partners are always helping each other to give the right education to their children. The one says: “Let’s give the kids a bit more freedom”, and the other one brakes a bit. If both are strict, they will lose the children. But also, if both are too liberal, they will again lose them. When different, they are able to keep their children in balance.
What I want to say is that everything in marriage is necessary. Of course, we must take care not to over cross the borders, but we must have in mind that every person may help the other; people are here to help each other.