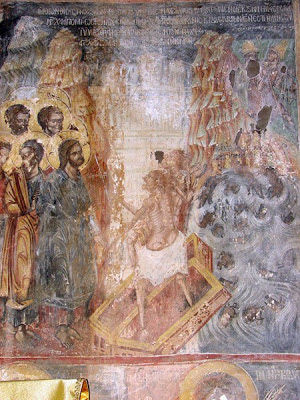 (Luke 8:26-39)
By His Eminence Metropolitan Panteleimon of Antinoes
As our Lord and Savior Jesus Christ visited the villages of Judaea, he met a man from the village of Gergeseen. Now, this particularly man few years ago became possessed by many demons, who made him suffer in many ways. The possessed man was in a wild condition, the result of the demons’ influence. He was ripping off his clothes and was living in the tombs of the dead. Although his relatives were tiding him up with chains, in order that he will be unable to harm any other human being, he was breaking his chains and was led by the demons into the wilderness.
In this miserable condition our Lord and Savior Jesus Christ, the Son of God, meets with the possessed man. The appearance of the possessed man is pitiable and frightful. Yet, the Merciful Lord walks into the wilderness in order to meet with His troubled creation, man. He meets with him and opens a dialogue with the unclean spirits, which with His Divine authority casts out and banishes them away from His creation.
The Work of Salvation of our Lord and Savior Jesus Christ had as its final goal to free man from the bondage and the tyranny of the evil one, Satan. With man’s fall into sin, day after day, year after year, he was drifting far away from God, falling more and more into the traps of the enemy. Mankind became enslaved to the devil. The peak of this tyranny is achieved, when man is possessed by evil spirits.
When the evil spirit posses man’s soul, then it rules over both his soul and body, in other words man’s whole existence. Man acts whatever Satan tells him to do, without having understanding of what he says or does. Man’s soul and conscience are paralyzed by the evil forces and are unable to react against them. Man lives the greatest misery of his existence.
Our Lord and Savior Jesus Christ, for the love towards man, came to free him. He came to meet with every man. He came to discuss with us and to guide us back to God the Father.


Every man, who lives far away from Christ, lives in the dessert of sin, of slavery, under Satan’s tyranny. Far away from Christ, as much as we may be proud of ourselves, there can be no true freedom. Man is tied with chains and the bondage of sinful passions. Man, who lives in sin, deprives himself from the Life-giving Grace of the Holy Spirit. Life, which is far away from Christ, is barren of virtuous and the man’s spirit is fruitless.
Our Lord and Savior Jesus Christ, the Son of God, in today’s Holy Gospel assured us saying, that every tree which does not bear fruit is cut down and thrown into the fire, because it is useless and not profitable. He also assured us that, if we want to bear fruit, we must be united with Him, for only then one bears many fruit, if he remains with Him. For without Christ we cannot achieve anything.
At this point we must speak about the great deception of many Christians, who created a false image of themselves and they live within a false belief, believing, that they could be “good Christians” without living the life of Christ, without Church attendance, without Holy Confession and Repentance, without Holy Communion, without the blessing of their marriage. They create a false image of themselves, which satisfies only their egocentric and egoistic personality. And though they boast about themselves, they are deprived essentially from every virtue.
Man, who does not follow Christ, His Holy Orthodox Church, and does not participate in the Holy Sacraments of God, lives in the hell of guilt, anxiousness and is always troubled. Therefore, we see men, who are enslaved to sin, to want to find some kind of deliverance from the tyranny of their conscience. They find refuge at night clubs or the casino believing that they will forget or will not hear the voice of their conscience, which cries out to them, that: “This is not the way and purpose of our life”!
The man who has not met with Christ, in order to ask for his healing from the spiritual illnesses, is like today’s demon possessed man, who, before being healed by the Savior Christ, was completely in the hands of the demons. How many fellow men, how many of us, how many of our relatives or friends, how many of our children are still under the tyranny of evil spirits and are enslaved in sinful passions of the flesh, bound by hatred, pride, unmerciful, greed and so many other passions? How many young people are overcome by the spirit of disobedience and contradiction to their parents, not respecting their own families and social surroundings?
The man who avoids meeting with Christ is like the cemetery which is decorated with beautiful tombs, but is empty and deprived from life. On the contrary, the man who meets with Christ is freed from the catastrophic influence of sin. The bonds of passions are crushed. The tyranny of the demons is abolished and man is healed by God’s Love within His Holy Orthodox Church and through the Divine Grace of the Holy Spirit, which is freely offered through the participation of the Holy Sacraments. The man in Christ finds himself. He comes to reasoning and becomes a new man, a new creation. The sinful man is transfigured into a holy man, fulfilling God’s Plan for man, to become in His “likeness”.
When man of the 21st century meets with Christ, speaks and relates with Him, then he departs from the desert of sin, he becomes free from the bondage of hatred and discovers his spiritual peace and calmness. The Lord has taught us saying: “Learn from Me, that I am meek and humble in heart and you will find peace in your souls”.
Let us approach Christ, because the Truth will liberate us from all that make us suffer and which drag us into deserts places which lack of God’s Grace.