The Spread of Christianity Through Persecutions 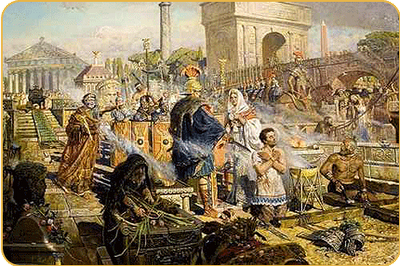 From Jesus Christ's Birth through the Edict of Theodosius
In order to prove the deceit of the claims of neopagans, that supposedly Christians prevailed through persecuting gentiles, we will show through numbers the way in which Christians increased and conquered the Roman Empire, despite the constant persecutions that they suffered for three continuous centuries by idolaters and their Jewish collaborators.
***
Source (greek): http://www.oodegr.com/neopaganismos/diogmoi/xr.istor1.htm
Translation: Holy Monastery of Pantokrator
c. 4 BC: Birth of Jesus Christ of Nazareth.
c. 27 AD: Beginning of Jesus Christ's public preaching.
At the time the Roman Empire was as follows: Population: 33,000,000 (50% slaves). The Jews in the empire numbered 2,300,000 (7% of the empire's population), mostly proselytes to Judaism. Palestine's population was 580,000 Jewish and 233,000 gentiles.
c. 30 AD: Crucifixion, resurrection and ascension of Christ. His commandment is given: “Go therefore and make disciples of all the nations” (Matthew 28:19) .
There were approximately 4,000 believers in Christ in all of Palestine during the days of Jesus’ appearances after His resurrection.
Pentecost. After the miraculous descent of the Holy Spirit and all that they had witnessed, 3,000 Jewish proselytes from every place of the known world were baptized as Christians, and then departed taking the Christian faith to Jews in all the places from which they had come (Acts 2:41). (Palestine, Israel, Egypt, Lebanon, Jordan, Libya, Syria, Italy etc.)
c. 34 AD: Martyrdom of the protomartyr Stephen, and persecution of the Christians of Judaea by the Jews. The persecution forces Christians to flee to other areas and to spread the Gospel. First Christians in Ethiopia from the Ethiopian eunuch, and in Samaria from Philip. Conversion of Saul to the Christian faith, who is then named Paul.
c. 35 AD: Multiplication of Christians in Judaea and Samaria (Acts 9:31). First Christians in Armenia.
36 - 40 AD: Entry of gentiles into Christian faith starting with Cornelius. Vast inflow of Roman Italian citizens from Peter in Caesarea (Acts 10:1-48). Christians in Antioch, Greece and Rome.
42 AD: Multitudes believe in Alexandria, Phoenicia and Cyprus (Acts 11:21).
43 AD: The number of Christians in Antioch (with Paul's and Barnabas' help) are 500. They are named Christians for the first time (Acts 11:21).
44 AD: Persecution of Christians in Jerusalem by the Jews, by king Herod Agrippa I. Beheading of James. Imprisonment and escape of Peter.
c. 50 AD: Jews and Christians are exiled from Rome. Paul preaches in Macedonia, Achaea and Asia (Acts 16:6).
52 AD: The Apostle Thomas preaches in India.
57 AD: Rome had approximately 3,000 Christians, 5 congregations. Total population of Rome: 800,000.
c. 60 AD: First Christians in Dalmatia and Illyria (Yugoslavia).
61 AD: Start of the Celtic Church.
63 AD: Mark's Martyrdom in Bokalia, near Alexandria.
64 AD: The great fire of Rome. 1st great persecution of Christians by Nero. Apostles Peter and Paul martyr together with thousands of Christians. The historian Tacitus (born around 56 AD) states that Nero, in order to remove himself from all suspicion, accused the Christians of the fire, who then “were torn by dogs and died” and “were burned by being thrown to the flames to be used as night lighting, when daylight diminished. Nero offered his gardens for this spectacle” (Chronicles, Book XV, para. 44).
66 AD: Anti-Jewish riots and organized massacres of Jews in Egypt. 50,000 were killed in Alexandria and 60,000 elsewhere.
67 AD: Vespasian, together with 60,000 soldiers, suppresses a Jewish riot and reoccupies Galilee.
69 AD: The Jewish diaspora that has heard the Christian Gospel from Christians, are already 4,000,000.
70 AD: Destruction of Jerusalem by Titus together with 4 legions. 600,000 Jews are killed in Judaea, 10,000 Jews are crucified, 90,000 are brought to Rome as slaves. The Christians that were formerly Jewish in Jerusalem were mindful of Christ's prophesy regarding the destruction of Jerusalem and escaped before the destruction, they scattered into other areas spreading the Gospel. End of Jewish Christians. The center of Christianity for the Eastern Empire is now Antioch.
Within 30 years (only one generation) after Christ, the percentage of the world which has been Christianized is about 0.1%. 15% of the world has heard the Gospel, and the Scriptures have been translated into 5 languages.
71 AD: The Colosseum is built in Rome. A large number of Christians are thrown to beasts or martyr in other ways.