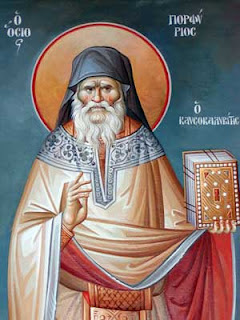 For this reason a mother must pray a lot during her pregnancy and love the child growing within her, caressing her abdomen, reading psalms, singing hymns and living a holy life. This is also for her own benefit. She makes sacrifices for the sake of the embryo so that the child will become more holy and will acquire from the very outset holy foundations. Do you see how delicate a matter it is for a woman to go through a pregnancy? Such a responsibility and such an honor!
I will tell you something about other animate and non-rational beings and you will understand what

I mean. In America the following experiment was carried out: in two identical rooms which were kept at exactly the same temperature flowers were planted in identical soil and watered in exactly the same way. There was, however, one difference: in the one room gentle, soothing music was played. And the result? The flowers in that room displayed an enormous difference in relation to the flowers in the other room. They had a quite different vitality, their colors were more attractive and they grew incomparably better.