St. John Chrysostom: The Greatest Interpreter of the Apostle Paul 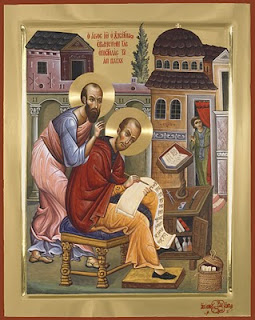 When St. Proclus was a novice under Chrysostom, during the time that he was patriarch, it was his duty to announce visitors. A certain nobleman was slandered before Emperor Arcadius and the emperor had expelled him from the court. This nobleman came to implore Chrysostom to intercede with the emperor on his behalf.

When Chrysostom asked him if the nobleman had come by, he replied that he had already been waiting for three nights, but that he couldn't announce him because of the elderly, balding stranger who had been whispering in the patriarch's ear for three nights. The astonished Chrysostom said that he did not remember anyone entering to see him during the previous three nights. He asked his novice what the stranger looked like, and Proclus pointed to the icon of the Holy Apostle Paul, saying that the man was like him.

Therefore, it was the Apostle Paul himself who was directing the mind and pen of his greatest interpreter.
http://www.johnsanidopoulos.com/2010/11/st-john-chrysostom-greatest-interpreter.html
στις 19:52