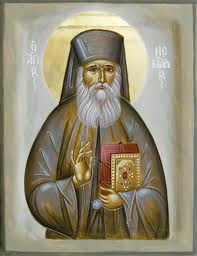 Life of the Saint.

Our Ηoly Father Nektarios was born on 1 October 1846 at Selymbria in Thrace. His parents, Dimos and Maria Kephalas, were pious Christians but not rich in this world’s goods. Their son was baptized Anastasios and, from infancy, showed great piety and love for study. When his mother taught him Psalm 50, he liked to repeat the verse: I shall teach thy ways unto the wicked and sinners shall be converted unto thee. After finishing elementary school, he was sent by his parents to Constantinople to continue his education, at the same time as working in a shop. The boy did not become entangled in worldly cares, but fixed his mind entirely upon building up the inner man in the image of Christ by prayer and meditation on the writings of the holy Fathers.

When he was twenty, he left Constantinople for a teaching post on the island of Chios. The young people and villagers where he taught were encouraged to live in piety and virtue by his words and above all by the example of his ascetic, prayerful life. On November 7, 1876, he became a monk in the famous Monastery of Nea Moni, for he had long desired to embrace the Aesthetic life. Seeking only those things which are above, he was beloved by all the brethren as the very pattern of gentleness and obedience, and was ordained deacon after one year. Thanks to the generosity of a pious islander and to the protection of Patriarch Sophronius of Alexandria, he was able to complete his studies in Athens and to obtain the diploma of the Faculty of Theology. In 1885, he arrived in Alexandria where he was soon ordained priest, then consecrated Metropolitan of Pentapolis (an ancient diocese in Cyrenaica, in what is now Libya). He was appointed preacher and secretary to the Patriarch, whose representative he became in Cairo, where he had charge of the Church of Saint Nicholas.

The Apolytikion of St. Nektarios.

Selybria’s offspring and Aegina’s guardian,
the true friend of virtue, revealed in these last times, Nekatrios let us, the faithful, praise as inspired servants of Christ; for he pours out healings of every kind for those who devoutly cry:
Glory to Christ who gave you glory!
Glory to Him who made you wondrous!
Glory to Him who through you works healings for all!
στις 13:58