I have returned back to my home 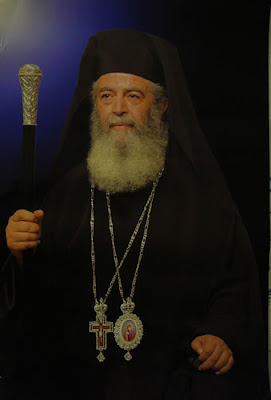 An exiting revelation and a heartfelt expression of thought by two blessed souls, that of Maria from New Plymouth (North Island) and that of Rozalina from Nelson city (South Island) of New Zealand.

Maria, daughter of an Anglican New Zealander and of Greek Orthodox mother from the Greek island Kythera, was baptized as an Orthodox Christian in the Annunciation Greek Orthodox Church in Wellington, which is the capital city of New Zealand. She lived, whoever, at New Plymouth, where had neither an Orthodox Church nor a priest. She felt the need to attend Church somewhere. Thus she was going to Anglican Church. She was married there with her husband, who was also Anglican, and baptized her children.

When she was informed, two years earlier, by the local newspaper that in New Plymouth an Orthodox Church will function by the name of St Nicholaos, she came to see, to ask and to learn. With honesty and overcome with emotions she said to Bishop: “A voice says to me that I belong here”!

She did not need long time to prepare, to cover the gap of these years which she lived far away from the Church to which she belonged and to which she now is returning, satisfying her mother’s soul who never ceased to pray for her in Heaven. As soon as she received Holy Chrismation, which is necessary for her incorporation into the Orthodox Church, she was joyful and said: “I thank God! I feel that I have returned back home”!

Rozalina, a Russian Orthodox, lives in Nelson; she is married to a New Zealand Anglican. In the above city there was neither an Orthodox Church nor an Orthodox Priest. Thus, the 15 Greeks, 80 Russians and I do not know how many Serbs, Romanians and other Orthodox lived deprived from their Church; and how many felt the need to attend church service and were attending at the Roman-Catholic, or more commonly at the Anglican Church. Rozalina, who is strong in her religious beliefs, practiced in the same manner.

The time came, when on Sunday the 13th April, the first Orthodox Divine Liturgy was celebrated. Many attended and the joy of 30 Greeks, Russians and Serbs was widely expressed.

Because Rozalina showed special interest in organizing this Liturgy, I asked to her to light the first candle before the holy icon of the Holy Trinity which was placed on an icon-stand. She agreed. She closed her eyes and wiped her tears which were outpouring and then she lighten the candle and honoured heartfelt the holy icon. When asked after the Divine Liturgy: “How did she feel?” She answered: “I felt that I returned back home”!

If we to have ask each and everyone who participated in the first Divine Liturgy, after so many years, we will have received the same answer. It was not necessary to ask them. They showed with their eyes full with tears as they approached to receive Holy Communion.

“I returned back to my home”.

Maria’s and Rozalina’s testimony is common. In Plymouth, Nelson and Hastings and wherever, after so many years, the opportunity is given to the Orthodox Christians to participate in the Divine Liturgy celebrated by a canonical ordained priest. Like thirsty deer they come to drink and to be satisfied from their Church’s cool and crystal spiritual water, which they know that is the One and True Holy Church and which they will never exchange with anything.

I have known the Orthodox Missionary work from very close and I know from first hand how important it is to give the opportunity to people who thirst to know Christ and His true Church; to be enlightened. To become civilized in the true meaning of the word.

As much of importance is the Missionary work, when one addresses the people who do not know the Saviour Christ and His Gospel, it is much more and priceless when its objective is not to loose those who are already Orthodox Christians, who in the multi-nation and multi-culture society face the danger to loose the valuable treasure of the Orthodox Faith, which they received with the Holy Sacrament of Baptism and Confirmation at their infancy.
Archbishop of New Zealand Amfilochios
http://www.ecp-metnz.org.nz/archarticles.htm
στις 17:34

Email ThisBlogThis!Share to TwitterShare to FacebookShare to Pinterest
Ετικέτες Archdiocese of New Zealand