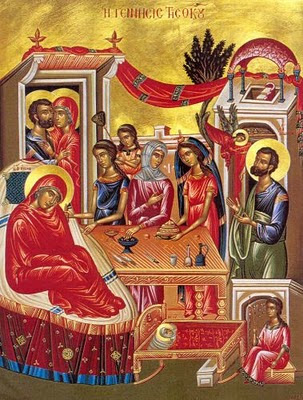 The most Holy Mother of God was born of her elderly parents Joachim and Anna. Her father was of the royal line of David, and her mother of the line of Aaron. Thus, She was of royal line on her father's side, and of hierarchical on her mother's side, with which She pre-imaged Him Who was to be born of Her, as a King and High priest. Her parents had been already grown old, yet, childless. Therefore, they were embarrassed before the people and humble before God. In their humbleness they prayed to God in tears to bring them joy in their old age and to grant them a child, as once before he had brought joy to elderly Abraham and Sarah granting them their son Isaac. And the Almighty God, Who sees everything, brought them joy that surpassed all their expectations and the most beautiful dreams. For He had granted them not only a daughter, but also the Mother of God; He lightened them not only with temporary bliss, but eternal as well. God granted them only one daughter who later gave birth to only one grandson - Yet, what a daughter and a grandson! Most blessed Mary, magnified among women, the temple of the Holy Spirit, the altar of the Living God, the table of the heavenly bread, the reliquary of the holiness of God, the tree with the sweetest fruit, the glory of men, the praise of women, the source of virginity and purity - that was the God-given daughter of Joachim and Anna. Born in Nazareth, and after three years taken to the Temple of Jerusalem, where from She returned to Nazareth later, only soon afterwards to hear the annunciation of the Holy Archangel Gabriel of the nativity of the Son of God, the Saviour of the world, of her most pure and chaste body.
στις 00:08

Email ThisBlogThis!Share to TwitterShare to FacebookShare to Pinterest
Ετικέτες Theotokos