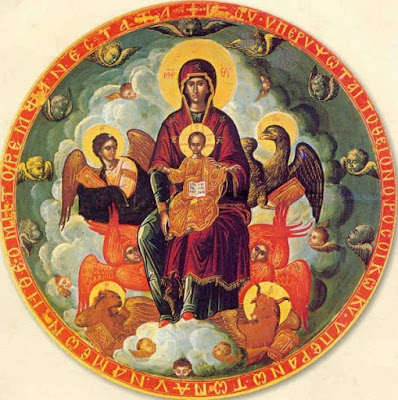 Prayer and Fasting: weapons for souls


Today is the fourth Sunday of Lent, dear friends, and we celebrate the memory of our venerable father John of Sinai, author of the Ladder (The Ladder of Divine Ascent). We are slowly ascending towards Holy and Great Friday and the Sunday of Pascha, and our Church is preparing us as Christ prepared his disciples and Apostles for His voluntary Passion.
The Holy Gospel according to St Mark, transports us to Mount Tabor. Jesus and His three well-known disciples have gone up the mountain where He was transfigured before them and they saw, as much as they were able to, the glory of His Divine nature, so that they could get strength and have courage also during the hour of His Passion. They came down from the mountain and found the rest among many people and a sick person, who was possessed, whose father came to Jesus because the Apostles were not able to heal him and complained to Him. Jesus was saddened and called them all “a faithless generation”. He was saddened at finding Himself among faithless people, among people who had no trust in Him and people who did not understand Him. The father shouted and said: “The Apostle could do nothing, so if you can, do something”.
Prayer – because what that father did was also prayer, even though it was weak and fainthearted – does great good for people, always, especially during great difficulties and problems. Our lives too have become extremely difficult today and we need God’s presence, His love and His protection. We get God’s strength through prayer, as well as through fasting, especially now in the period of Holy and Great Lent. It is through prayer that we rise to the Lord and leave behind all concerns. Through fasting even our bodies become light and can rise too. Our bodies become spiritual and through fasting can also avoid illness and torment and many other things. The Church which appointed fasting, is omniscient, even from a medical and scientific perspective.
Christ shows His concern for the possessed man. He asked how long he had been suffering and his father replied: “Since he was a child, so if you can, do something”. And Jesus said to him: “If you have faith, I can do everything”. And then, seeing that crowds were assembling and as He does not like conceit and exhibition, he ordered the demon to depart. Let people say that there is no demon and that demons are a philosophical explanation of evil. It would be great if this was true. There are demons and they torment us and only Christ and the Church can liberate us from them. So, He ordered the demon to depart. And after it had screamed loudly and quivered and tormented his possessor, it departed. The child fell down and many thought that he had died. Jesus took him by the hand and lifted him up. That’s what Jesus does. After prayer and fasting we give Him our hand and He gives us His. And so we build a relationship with Him, we communicate with Him and gain strength. He then gave the child to his father.
Our youth today can be demonized and can shake and fall and die, many times literally. Only Christ and the holy Church can help them.
Finally, His Apostles asked Him, when they were alone with Christ, why they were not able to get rid of the demon. The Lord did not rebuke them for their faithlessness and difficulties. Jesus does not reprimand, we do. But he told them that this type of demon does not depart in any other way other than with prayer and fasting. Prayer and fasting then are the most powerful weapons in our lives.
Finishing the Gospel, Jesus made a second forewarning of His Passion, telling them that He would be crucified, given over to the hands of the people, not the hands of demons who are the worst, but into the hands of people who He befriended who would kill Him, but that He would rise on the third day. He told them of the Resurrection so that they could have courage.
Every time we have a problem and we are crucified, Christ gives us a window to look towards the future, the optimistic future, to the Light and the Resurrection.
Christchurch 29/3/2009
στις 16:48