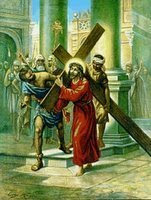 A priest named Sapricius had a very close friend named Nicephorus, who was a layman. There was so much love between them that each thought that he lived within the soul of the other. However, the devil’s malice caused a situation which brought about all this friendship and made them enemies, so that neither wanted to set eyes on the other. Nicephorus quickly overcame the passion and with perseverance sought to restore the beauty of their friendship. At first he sent mutual friends to reconcile them, saying that he was to blame for all the causes of the disagreement and begging for forgiveness. Sapricius however remained adamant and hard and did nothing to dissolve the enmity, albeit that he was a priest. At some point Nicephorus approached Sapricius, felt at his feet and with tears begged for his forgiveness and asking that they become friends again. However Sapricius, with no feelings at all, walked past him quickly, without even speaking to him, without even looking at him.
That is how things were between them, when the Epmperor Julian began a new persecution against the Christians in his efforts to restore the old idolatrous religion. So when the order for the persecution arrived in the city in which both Nicephorus and the priest Sapricius lived, Sapricius was arrested first because he was a priest. The ruler of the city, after torturing him, asked him to deny Christ, putting him through many torments, but Sapricius would not deny his faith. Finally, the ruler sentenced him to death by the sword. Knowing all this, Nicephorus believed that now the time was right for their reconciliation. He appeared before Sapricius, knelt in front of him, embraced his feet and begged him before he dies to forgive him. However he continued his inhuman feeling and did not soften his heart at all at the emotion and lamentation of Nicephorus. With the wax of malice he had blocked his ears and quickly bypassed his friend. Again Nicephorus did not despair, but went to him again and with more fervent please begged his mercy, shedding many tears. Sapricius remained deaf and seemed to be made of stone when he arrived at the place of the execution.
As the hands of the executioners lifted the sword and Sapricius bent his neck to receive the torment, and the crowns which he was to inherit from Christ, were already above his head, something astonishing happened: Darkened by malice he seemed to not be aware of whose presence he was standing in and seemed also to forget why he had been arrested, and in total confusion having lost his mind, asked why he was to be executed. The executioners replied that he had ignored the royal commands and was not convinced to offer sacrifices to the gods. And then came the worst fall of resentment together with his denial of Christ and the true faith and his declaration that he would sacrifice to the gods.
As soon as Nicephorus saw this, his heart broke and with fervent words said to Sapricius:
“My brother and father, do not wish to betray the God who created you and to whom you will return after your death! Do not assail the laws of piety, or the confession which you made before God and the angels. Respect the previous torments which you underwent for Christ. Honour the great office of the Priesthood. I beg you, my friend, on bended knee, do not deny your confession of the Holy Trinity, now that you have in your hands the awards and almost upon your head the crowns of the athlete. But Sapricius became all the more harder and unfeeling, because his heart had been filled with malice and therefore could no longer contain piety. Then Nicephorus, bursting with zeal because of his own piety and that of his friend, and because he could no longer do anything for him, threw himself into the torment, confessed Christ and placed his neck under the swords of the executioners. So, in this way, Nicephorus the forbearing and forgiving, endured the martyred death by the sword and in a short time and with little effort earned the Kingdom of Heaven and was proved to be genuinely victorious. This example shows us that no physical struggles and labours can reconcile us with God as much as compassion and concern and love for our neighbour can, for this is the beginning and the end of all virtues…((Evergetinos Volume 2, Issue 42)
στις 01:57