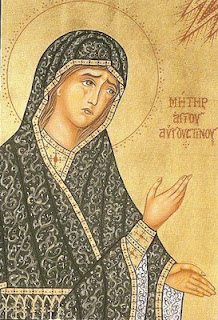 A mother who saved her prodigal son through her tears…

Monica was born in Tagaste in Numidia (North Africa), in 332 BC. Her parents were pious Christians and despite the fact that they were wealthy, they referred to give her a Christian education rather than the falsely-affected education which transfers people into conceited characters.
Therefore, they entrusted her upbringing to an elderly tried and virtuous servant, who tried as much as possible to make her worthy of her future role. However, despite her advice and her precautions, Monica was beaten by a bad habit. She began to drink and as time passed she drank many glasses of wine, something which was probably due to youthful recklessness rather than a love of liquor. God in His goodness, though, brought her to her senses, when, during a dispute with one of her servants, the servant said to her: “Are you, who become drunk, going to teach me?” This was enough to make Monica stop her bad habit; not only that, she also systematically began to read Holy Scripture and to devote herself to the word of God.
Her parents married her off to Patricius who was from an aristocratic family, an idolater but an accommodating person. In order to draw him to the Christian faith, Monica obeyed him implicitly, as the Apostle says. He did have two great faults, however. He had extra-marital affairs and was also very volatile. Monica was saddened both because he did not respect marital honour and because he sinned in the eyes of God. However, Monica never caused scenes or arguments at home. She continued to surround him with her love and with Christian tenderness.
Monica was also an example to her mother-in-law, who was eccentric and also did not like her. Monica persisted and took care of her with love; her mother-in-law changed so much that she punished any servants she heard slandering her daughter-in-law. That which gave her the most joy, however, was Patricius’ return to the ways of God. At some point her husband became gravely ill and shortly before his death he was baptized and became a Christian.
Monica bore a son by Patricius, named Augustine. As a youth Augustine was prone to a wasteful life. Monica struggled throughout her life to make him a Christian, from the time he was a young boy, but his father’s example and Augustine’s own restless life brought him to the way of sin. At the age of 19 he went to Carthage to further his studies. There, where debauchery was rampant, he was totally captivated by illegal pastimes and became a member of the then well-known heresy of the Manicheans. Monica heard this, but she knew how to be patient, to cry and to pray. She waited for him at night with tears in her eyes, to return from the houses of sin. She shed so many tears – as he himself later wrote in his “Confessions” – many more than those which mothers shed over the bodies of their dead children. Monica saw Augustine daily, not physically, but spiritually dead. However, God, who noticed her tears, also took care of her son’s return. Once, the Bishop of Carthage had comforted her, saying: “A child who causes his mother so many tears can never possibly be lost; your son will be saved”.
Augustine left Carthage and went to Milan as a teacher of rhetoric. There he joined the devout Bishop Ambrose of Milan, and his acquaintance with him brought about his departure from the delusion of the Manicheans. Augustine continued to experience a struggle between good and evil. A naturally restless and unsatisfied soul, he searched constantly for the Truth. One day he heard a voice telling him: “Take and read”.
He opened the Bible at an excerpt: “Not in reveling and drunkenness, not in debauchery and licentiousness…”.
He began to see sin as a torturous punishment. He abandoned his sinful life and in a continual path of repentance began to approach God more and more. He received catechism from the Holy Ambrose and on 24th April 387 AD he was baptized and became a Christian.
The angels in heaven rejoice for every soul that repents. Together with them on earth, his mother Monica, St Monica, also rejoiced and this time she shed tears of joy and praised and thanked God. The return of the creature to the creator became a fact.
Mother and son returned to Rome. There Monica was struck by a fatal disease, which quickly worsened daily…The day of her departure from earthly life approached, opening the way to the next life, eternal life, unending life with God…Sadness overcame Augustine’s heart. Monica begged him not to worry because this separation is not worthy of sorrow as it is temporary; we will all meet up again in the heavenly Jerusalem. She asked only that she be commemorated in the Holy Prothesis in the Divine Liturgies… She breathed her last at the age of 56, when Augustine was 33.
The tears f a mother, like Monica’s, are shed at every step of her life. She prays and hopes. She never buckles in prayer. She is never angered, she never complains to God. Together with her prayers, she lives a holy life, doing good deeds. Monica saved her son, her husband and her mother-in-law. She is probably the best example for mothers, wives, daughters-in-law.
Our Church commemorated her memory on 15th June.
στις 15:28